Certainly, Saturn is one of the most beautiful planets in our solar system. Its glorious rings and beautiful shimmering pinks, hues of gray and a hint of brown color make it a delight to behold. However, to see all the details of this impressive planet, you’ll need a powerful telescope to watch rings of Saturn.

Choosing the right watching time is also important. July 2020 was the last time we were able to see Saturn’s rings facing directly against our planet. So, you’ll have to wait a few months more to enjoy this wonderful spectacle once again. But most of the day (without rainy day), you can watch Saturn’s rings easily with a Telescope.

In the meantime, it’s a good idea to upgrade your astronomy equipment and purchase the best telescope to see Saturn rings. Today, we’ll give some tips to make the best buying decision of a Telescope. 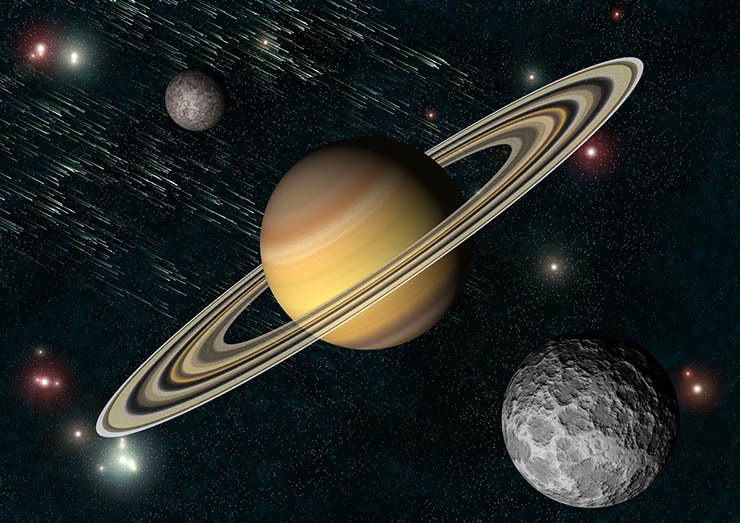 A telescope is an optical device used to observe objects located in long distances. The most basic example of a telescope is made up of an optical tube and a series of lenses.

The light passes through the objective lens and it’s then a reflected on the eyepiece. These kinds of telescopes are commonly known as refractive telescopes. The first Telescope invented in the 16th century and became popular thanks to Galileo’s discoveries.

How to Do Me​asurements of a Telescope Power?

Basically, the power of any telescope depends on three basic factors:

The aperture is the diameter of the objective lens or primary mirror of your telescope. It’s also defined as the size of the opening through which the light penetrates the optical tube. The Aperture is directly related to light exposure. The larger the aperture, the clearer the images you get.

Having a bigger aperture is always a benefit. However, a large aperture also increases the size and weight of you telescope. That means it will be more difficult to carry and setup.

Saturn is the sixth closest planet to the Sun in our solar system. It’s also the second largest after Jupiter and the nice with rings around its orbit. Most of the planet is made up of a huge mass of hydrogen, helium, and other gases. Saturn is 740 times the size of Earth. However, its density is very low.

What Are Saturn’s Rings?

Saturn rings are millions of scattered spinning around the planet’s rotational orbit. It’s estimated that the particles in the rings rotate faster than 48,000 km/h. This speed is almost 15 times the speed of a bullet.

Galileo made the first observations of Saturn rings during in the 17th century. However, the power of telescopes wasn’t enough to detail their components. Later, Christiaan Huygens got a better view of the planet.

However, two hundred years later, James Clerk Maxwell finally deduced that the rings were made up of particles.

How to See Saturn Rings With A Telescope? – Step by Step DIY Guide

Seeing Saturn rings requires planning and the right equipment. Here’s a step-by-step guide with some tips you should follow to be successful in your mission.

You can easily see Saturn rings with a small 25X telescope. However, if you want to see the small gaps between rings, it’s more convenient to choose a telescope with at least 75 mm of aperture and 50X of magnification.

As like any other planet, Saturn is in constant motion. For that reason, the rings may be more visible in certain months. You can consult the Internet to know what will be the best time of the year to see Saturn depending on your current location.

Choose a place with a clear sky to install your telescope. Also, make sure to check that there will be no clouds or rain on that special day.

Search for the Fine Tuning

Once you’re on that special day, search for the actual location of Saturn. You can easily find that information on Google. If you have a motorized telescope, you’ll just need to put in the coordinates with the control. Fine tuning of a Telescope can give you the perfect view of Saturn’s rings.

Some short cut queries with answers. That can help you to understand about Saturn’s rings and related topics. So let’s go we check these.

What is the best time of the year to see Saturn rings?

July is the best month of the year to see Saturn rings. At this time, the planet is in opposition with Earth and the rings look like a tilted compact disc.

What is the minimum magnification to see Saturn?

To see Saturn you need at least 25X of magnification.

Do I need a special filter to see Saturn?

Yes. Using colored filters will help to highlight some details on the surface and the rings of the planet. Here’s a list of some filters you can use:

As you can see, you don’t need to be an expert astronomer to see Saturn rings. A small 25X telescope is enough to watch this jewel of the universe with your own eyes. However, if you want to notice the smallest details on the rings, you’ll have to invest more money on equipment.

A higher aperture and longer focal length will give you a better view of Saturn. However, using a color correction filter will help you differentiate some detail on the rings and the surface. Never forget that July is the best month of the year to get the best perspective.